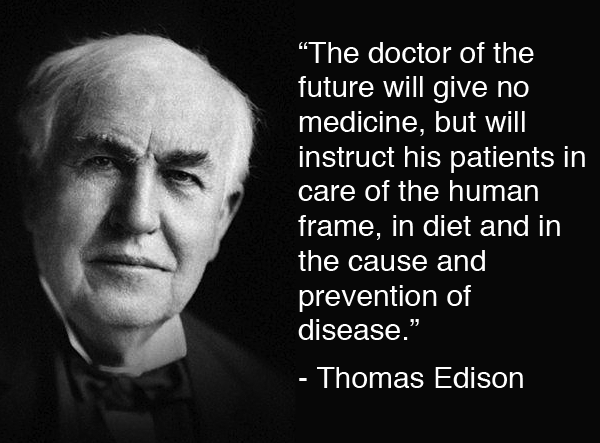 The most miraculous “invention” in the history of the world is the human body and yet we underestimate (and undermine) its ability to do what it was designed to do without blinking an eye!

Most lab coats with prescription pads won’t tell you about those “natural” things that would address the underlying problem in hopes of avoiding medications altogether. But in their defense, they’re trained and paid to treat…not cure.  That makes a lot of sense when you consider that there is NO CURE FOR ANY DISEASE whatsoever!    I’d much rather do my part to CURE the problem than treat the symptoms any day!

As miraculous as the human body is, it only needs a few things to sustain health – but most people prefer to go with (what they perceive to be) a quick fix instead of putting in the effort to heal.  To some, their doctor has become their god.  Most people just can’t resist opting for a low co-pay in exchange for spending a little hard-earned money on healthier food (and water), cleaner air, supplements (to make up for what the body lacks) or fresh air and exercise.  For them, it’s much easier to fill a prescription, and they sabotage the body’s natural ability to “heal itself” in the process.

There is plenty of science behind some of those “natural” things the body needs and you don’t have to look far to find it.

Refrain from food laced with pesticides as well as processed foods and you’ll see an amazing difference!

Refrain from bottled water laced with chemicals and plastic particles and trade it for healthy water and you’ll see an amazing difference!

Refrain from being glued to the television for hours on end and trade the time for a walk instead and you will see an amazing difference!

Refrain from a broken belief that all the nutrients you need are found in your Big Mac and give the body supplements in exchange and you will see an amazing difference!

Everything that we need to sustain health is already at our fingertips and it doesn’t come in a prescription bottle.  For instance, there are lots of supplements that address lots of things – there are even a few natural herbs that are so POWERFUL that pharmaceutical companies have attempted to get them approved by the FDA so that they can be prescribed – turmeric is one of them.

EXAMPLE OF MEDS THAT TURMERIC CAN REPLACE

Lipitor/Atorvastatin (cholesterol medication): In a 2008 study published in Drugs in R & D, turmeric performed just as well as atorvastatin (Lipitor) for correcting the underlying pathology that causes oxidative stress in the blood vessels – endothelial dysfunction. Not to mention, turmeric does not incite horrific side effects like statins do, such as mitochondrial dysfunction, muscle wasting, and cognitive impairment.

Corticosteroids (steroid medications):  Turmeric can provide noticeable relief for acute pain.  A 1999 study published in Phytotherapy Research found that turmeric is just as effective as steroids for treating inflammation.  A 2008 study published in Critical Care Medicine found that turmeric “down-regulates inflammatory genes and can replace the drug dexamethasone for the treatment of lung transplantation-associated injury.”

Metformin (diabetes drug):  Your DNA does not have to be your destiny!  In 2009, researchers found that curcumin “activates AMPK, allowing for increased glucose uptake. Curcumin also suppresses gluconeogenic gene expression in hepatoma cells, allowing for glucose production in the liver”.

Oxaliplatin (Chemotherapy drugs): A 2007 study published in the International Journal of Cancer found that curcumin is just as effective as oxaliplatin, a chemotherapy agent that inhibits proliferation in colorectal cell lines. In a 2004 study published in the journal Oncogene, a combination of curcumin and resveratrol was just as effective as anti-inflammatory drugs for the mitigation of tumor cells.  A 2007 study from the University of Alabama at Birmingham details the mechanism by which curcumin has anticancer, chemosensitization, and radiosensitization effects. Curcumin down-regulates the MDM2 oncogene through the PI3K/mTOR/ETS2 pathway in human prostate cancer cell lines.

Prozac/Fluoxetine (antidepressants): A study published in a 2011 issue of Acta Poloniae Pharmaceutica showed how curcumin can reduce depressive behavior in animals. A 2015 study found even more promising results in humans with major depressive disorders.

Curcumin heals where chemotherapy fails: A 2010 study published in TNO Nutrition and Food Research finds that curcumin has value in treating cancer cell lines that do not respond to chemotherapy.

Instead of spending time researching the latest and greatest pharmaceutical, maybe it’s time for you to research what your body needs to take care of the healing process on its own!

Everything you need to be healthy was provided at the time the greatest “invention” in the history of the world came along.

All you have to change is your mindset!

ALL ACROSS THE GLOBE!

Have you read this Amazon #1 Best Seller?  Read it before you take another sip of water!