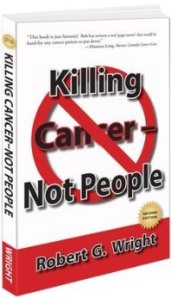 Robert Wright, author of Killing Cancer – Not People and Director of the American Anti-Cancer Institute has no vested interest when it comes to water ionizers (or any other product).  His ONLY mission is to help others rid themselves (and prevent) the Big “C” naturally by sharing his knowledge with others.  The title of his book says it all and it is a MUST READ!

Below is an excerpt from an email communication between Robert Wright and someone who wrote to him after reading his book.   Keep in mind that Robert is NOT offering medical advice...just his educated opinion of a proven natural approach to a very big problem.  Since we’ve known the root cause of all disease (INCLUDING CANCER) since 1923 when Dr. Otto Warburg discovered (and won the Nobel Prize for) that “no disease, including cancer, can live in an alkaline environment”, I BELIEVE that Robert Wright is absolutely, positively on the right track.

“The Kangen Water is the best ionized water (by far) that I have researched – and we recommend it highly.  When you understand that it is very alkaline and the best way to bring the body to alkalinity the fastest, that it is also very hydrating and, most importantly in my opinion, that each 12 ounce glass has more antioxidant capacity that all the organic fruits and vegetables that one could possibly eat in a day, then it becomes more comprehensible.  I would start drinking the 8.5, move to the 9.0, then the 9.5; trying to work up to an ounce per pound of body weight per day.  After a couple weeks on lots of 9.5, I would start to add 4 ounces three times per day of the 11.5.  I would increase that gradually over time up to 16 ounces 3 times per day for a couple of months.  Again, that’s what I would do – and we have seen the fantastic results with people who do that.

Hopefully, this helps.  My only dog in this fight is to see your family get well.  And, I truly believe that with the right protocols, this will happen.  Wishing you and yours the best.”.

THERE IS NO CURE FOR CANCER!

GETTING THE BODY IN BALANCE IS KEY!

I pray that I never hear the words “sorry…it’s cancer” but I know, beyond a shadow-of-a-doubt, that if I do I will give my body whatever it needs in an effort to kick it into “high gear” in the healing process the way it was designed to do in the first place.  Then again, I’m a fighter by nature and I’m open minded enough to look for alternative answers!  Sadly, that’s not the case with most. Reportedly more people are “killed” undergoing cancer treatment than those who die of the disease itself.  It is also reported that people who forego radical treatment live longer than those who opt for chemo and radiation.   I think I’ll pass.

Kangen Water® is part of my daily protocol and I wouldn’t trade it for all of the money in the world.  I’d rather be proactive in PREVENTING the Big “C” in the first place than to be scrambling for answers in the midst of the storm.

What about you?  Do you want to join me in being proactive or do you prefer to just roll-the-dice with a protocol that clearly isn’t working?  Hmm…

CHANGING THE WAY THE WORLD LOOKS AT WATER…ONE DROP AT A TIME!