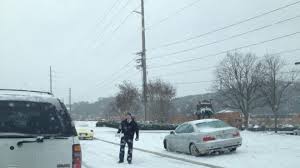 When the snow first began to fall in the south nobody paid too much attention.  But before too long local residents found out the hard way that this was more than just a dusting of snow.  Without snow plows and salt trucks to lead the way, thousands of people were stranded on highways.  Commuters, families, children on school buses.  This storm was no respecter or age or circumstances.

It’s no secret that Chick-fil-A was founded by a Christian family. And it’s no secret that they run their business on biblical values. What happened in Birmingham, Alabama is an example of how those biblical values are played out in real life circumstances.  This is an example of “practicing what you preach” that all of us can learn a valuable lesson from.

Some of the drivers had been stuck in their cars for nearly seven hours without any food or water so the stranded staff at a local  Chick-fil-A decided to lend a helping hand.  They  cooked 280 sandwiches and braved the  snow and ice as they handed out warm sandwiches to those in need.  Chick-fil-A refused to take a single penny for their sandwiches.  The meal was a gift – no strings attached.

When nightfall came, they opened their doors for people to camp out on benches, tables and floors so that they could stay warm and safe.  When the morning came, Chick-fil-A got busy cooking breakfast for all of their overnight guests…on the house.

Chick-fil-A opened its heart, its doors and its kitchen to help their neighbors in need.  The only thing closed was their cash register.  Instead of fretting over lost revenues brought on by a surprise storm, they rolled up their sleeves to serve others in need and they gave away food until it was gone.

This is an example of true kindness.  No hidden agenda…no political platform…no expectation of anything in return.  I don’t know how much this Chick-fil-A lost (in revenues) that day but I know that the gain for others far exceeds a free meal.