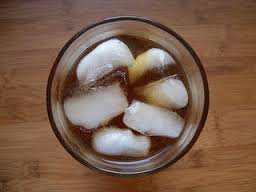 In 2006, a Florida seventh-grader made national news with a science project showing how ice at various fast food restaurants in her hometown contained more bacteria than the toilet water in those same establishments.  Nasty!  Either these places aren’t properly cleaning and maintaining the ice makers OR the employees in charge of dipping it up aren’t washing their hands.  Double nasty!

Aside from sounding disgusting, bacteria in ice isn’t necessarily bad for human health unless it’s the wrong kind of bacteria, that is. Unfortunately, a local Indianapolis news group performed a similar ice study on 25 city bars in 2008 and found that 1/2 of them tested positive for E-coli.  Now that’s enough to make anybody drink!

I’ve been “holding” the ice for years.  Partly because I’m not crazy about “ice-cold” and partly because I know that cold liquids cause the digestive system to drastically slow down while it works to heat the liquids.  Now I have an even BETTER reason to avoid ice.  I can’t get past the idea of E-coli making its way into the ice machine.

I’m not a “germaphobic”  and I don’t walk around with a gas mask on BUT I do take action to avoid germs and bacteria as best I can.  The handiest, most powerful (and least offensive) tool that I use is 2.5 pH water.  Water at this pH level has been scientifically proven to kill things like E-coli, salmonella and MRSA within 30 seconds of contact.  There isn’t a more effective germ killer on the planet and nobody complains about me spritzing water on surfaces everywhere I go.  The best part is that I am able to get an unlimited supply of 2.5 pH water from my Enagic ionizer in my own kitchen.

You can  do a lot of things just by altering the pH of your water.  In fact, my motto is “Blue is the New Green”.  Whatever you do (or don’t do) to go green, at minimum you should consider holding the ice.  After all, you never know where the hands that scooped it up for you have been.

BLUE is the new GREEN!